When I glance at Anne Tyler’s new novel Clock dance, I keep misreading the title as Clog dance. (The cover does have a beautiful backlit photo of a couple of girls dancing on a footpath.) 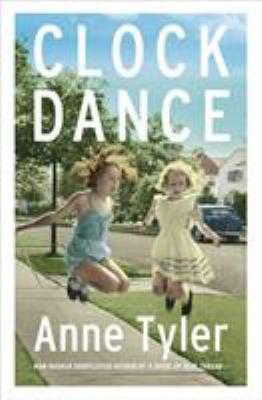 Do I keep thinking of the wrong title because of this photo? Is there some sly, ironic echo that she has set up here? Or is it just a mnemonic irrelevance, that keeps forcing its way to the surface because I am sleep deprived? For whichever reason, I find her to be a writer in whose seemingly modest domestic dramas, unexpected things happen.

I woke pretty early this morning with a kind of anxiety dream about this book. Actually, I felt more pleasure than anxiety: I could write about the way my dream fitted with the novel. I just had to go to the toilet first. Of course, when I had stealthily gotten up, made a cup of tea, and was sitting in the study with the cursor pulsing away at me on the laptop screen like a therapist possessed of implacable patience — after all this, there was no more dream, just a memory of a mood. No matter; I can just write about the book.

Well, once I got WordPress working, I could! The incestuous thing wasn’t saving drafts. I looked through the help procedures, but there wasn’t anything that related to “can’t save drafts” or similar. I saved my post as a Word file, then looked up “Contact us”, expecting to get an email address. I actually ended up in a chat session with a Happiness Engineer — I kid you not!

He did solve the problem — assuming it was a him — so kudos to him. After some to-ing and fro-ing about why they don’t have a procedure for solving this, I browbeat him into saying he will “see if we can get a document up” with the basic steps in it that he has suggested for me. By the time all this had occurred, I had absolutely had it, and went to sleep for about half an hour in the study.

So to the book. The plot covers the familiar Anne Tyler territory of eccentric extended families. Willa, a woman who was made a widow in her forties, has remarried. She has moved to Arizona with her second husband, Peter, who is eleven years older than her, and inclined to be patronizing. This situation is preceded by a sort of prelude in which she is shown as someone that things happen to; a typical Anne Tyler character, sleepwalking through her life.

A phone call changes everything. Her son’s former girlfriend, Denise, who lives in Baltimore, has been shot in the leg. There is no-one available to look after Cheryl, the daughter. Despite the fact that the child is not her son’s daughter, Willa decides to fly to Baltimore to take care of her. Peter decides to come with her because he doesn’t think Willa can manage without him. Time passes; Peter goes home, Willa stays in Baltimore.

This is a book with a lot of love for the characters, and a boundless appreciation for small things. There is a lot about food. Cheryl bakes, proficiently. Peter barbecues, elaborately. Willa goes grocery shopping and makes suppers for Cheryl and Denise. Willa’s life in Baltimore is almost studiedly mundane, but she finds herself staying longer than she needs to, because she feels needed there. Just as Willa is drawn into her temporary life, the reader is lulled by the rhythm and pacing of the novel, to the point where the idea of someone fetching up somewhere like that seems plausible. You can see why Nick Hornby called her the best line-and-length novelist in the world.

There are strange echoes of Portrait of a Lady. What would that book look like if Isabel Archer had travelled to Baltimore instead of Italy? If she had married Gilbert Osmond, left him, nearly gone back to him, but backed out of that at the last minute, to go where she could be loved? If she could take Pansy with her as well? Ralph Touchett and Lord Warburton are in this book as well. It is all quite playful and very subtle, and goes down like a big tub of the best ice cream. You can see I loved it. Give it a go.